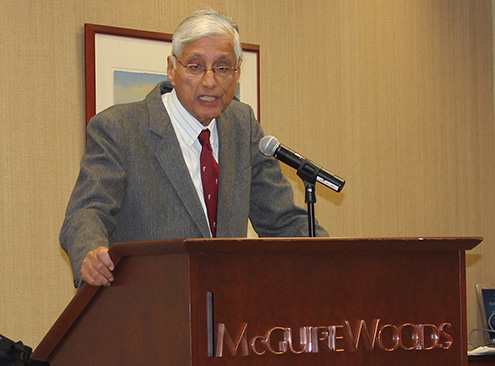 Rajmohan Gandhi, the grandson and biographer of Mahatma Gandhi, was the keynote speaker at a fundraiser held in McGuireWoods’ Washington, D.C., office on November 12, 2015. More than 80 people attended the event on behalf of the Caux Scholars Program of non-profit Initiatives of Change, of which Richmond partner Donald King is a board member.

Mahatma Gandhi was the architect and leader of India’s successful struggle for independence from Britain. He inspired subsequent nonviolent movements to achieve social justice and civil rights led by the Rev. Martin Luther King Jr. in the United States and Nelson Mandela in South Africa.

Rajmohan Gandhi spoke to the question “How would Gandhi, King and Mandela counter violent extremism?” Having met all three men in person, he offered personal anecdotes of each. He concluded by saying that from their examples, he adopted his view “If all people are not my people, then I contribute to violence.”

The mission of Initiatives of Change is “building trust across the world's divides.” The Caux Scholars Program aims to inspire, train and equip young people who can build trust where there are divisions and bring people together to resolve conflicts.