In the face of hyper-partisan politics and an ever-growing media spotlight, companies and individuals facing scandal are more likely to be the subject of politically charged investigations and face collateral litigation and enforcement actions. When that happens, reputations, careers and businesses are put on the line. Time and again, clients have called upon the skilled members of McGuireWoods’ Political Investigations, Litigation and Enforcement Team to handle their most sensitive and high-profile matters.

When scandal emerges, our experienced Political Investigations, Litigation and Enforcement Team leverages a storied history of helping corporate clients, individuals and elected officials navigate the complexities of politically charged investigations and enforcement actions. One need only look to the national headlines to find the matters we have led. From the Boeing MAX investigation to the Mueller probe; from the opioid crisis to clergy misconduct; from the USA Gymnastics scandal to a multi-agency investigation into a major bank’s sales practices, clients trust us when they face external scrutiny and significant legal challenges.

Our seasoned team of more than 80 attorneys is strategically positioned from Los Angeles to New York—with a strong Washington, D.C. presence—and includes a former Counsel to the President of the United States, a former Deputy Attorney General and acting Attorney General, former United States Attorneys, a former state attorney general, and former DOJ and SEC officials. With the benefit of this experience, McGuireWoods maintains strong relationships with investigating agencies and understands how they operate. As a result, we bring credibility to any representation.

Our political investigations team also leverages the wide-ranging capabilities and relationships of McGuireWoods’ lobbying arm, McGuireWoods Consulting, which is comprised of a strong bipartisan team of Capitol Hill veterans who understand the political process. This experience has never been more necessary given the current political climate.

C-suites of Fortune 500 companies, senior executives, boards of directors and high profile political leaders rely on McGuireWoods to handle responses to politically charged investigations from inception to resolution. We focus on minimizing the business and personal interruptions an investigation can cause. By developing strategies to reduce and address private litigation and criminal exposure, we help to navigate a cumbersome, time-consuming process while limiting the consequences of an investigation.

We also work closely with our Strategic Risk & Crisis Management Team to manage ancillary issues, including board and shareholder relations, media inquiries and other crisi management matters.

Our team also leverages McGuireWoods Consulting, our legislative consulting arm comprising former elected officials and staffers from both sides of the aisle. Our combined team includes: 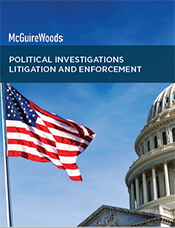 A Question of Ethics

A Question of Ethics