When the City of Richmond’s Bus Rapid Transit (BRT) system (known as the PULSE) begins operating along Broad and East Main streets in October 2017, new transit oriented development projects in that area may follow.  If a resolution adopted by the Planning Commission last week authorizing the rezoning of the Scott’s Addition and Boulevard areas is ultimately approved by City Council, these areas may soon feature seamless streetscapes, taller buildings, active first floor and sidewalk uses and no visible parking lots

The proposed rezoning of Scott’s Addition would occur through two separate but related ordinances. The first ordinance would amend the city’s zoning ordinance to incorporate changes to the B-7 Mixed Use Business District regulations and create a new Transit-Oriented Nodal District (TOD-1). The second ordinance would then amend the city’s zoning map to rezone those portions of Scott’s Addition not fronting on the Boulevard or West Broad Street to the amended B-7 district and rezone areas along West Broad Street and the Boulevard to the new TOD-1 district. The rezoned areas are shown on the map below, which you can view in a larger size, together with copies of the draft ordinances’ text and other materials. 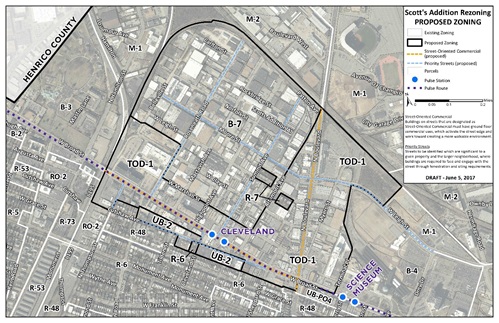 The city’s Department of Planning and Development Review (PDR) staff calls the draft TOD-1 district “unabashedly urban.” The recommended ordinance states that it is “intended to encourage redevelopment and place-making, including adaptive reuse of underutilized buildings, to create a high-quality urban realm.” If approved as written, the TOD-1 regulations would permit a wide range of commercial, manufacturing and multifamily uses and would employ form and massing requirements to create walkable streetscapes. Minimum and maximum heights would be two and 12 stories, respectively. Most buildings would have a maximum setback of 10 feet and a required minimum number of street-oriented windows. Surface parking would be heavily discouraged through the elimination of surface parking as a principal or conditional use, and any accessory parking would be subject to robust screening requirements. The proposed TOD-1 ordinance would eliminate parking requirements for all uses other than hotels and multifamily residential buildings with more than 16 units. The district’s other regulations would encourage dense, walkable communities centered on high-activity nodes near PULSE stations.

Next door, the bulk of the interior of Scott’s Addition is proposed to be rezoned from M-1 Light Industrial to the B-7 Mixed Use Business District first put in place in the Manchester neighborhood. If the proposed B-7 district regulations are amended, the district would include greater flexibility in designating “street-oriented commercial” corridors, where street-front retail would be required as part of any residential use and certain car-oriented uses like gas stations and parking decks would be prohibited. In Scott’s Addition, these corridors would be Moore Street, Summit Avenue and Roseneath Road. The proposed amendments to the B-7 district would also permit certain “maker” light manufacturing uses of under 10,000 square feet by right, which, if approved, would likely mean the area’s ongoing boom in breweries, cideries and distilleries will continue unabated.

PDR staff indicated that both ordinances are scheduled to be introduced to the Richmond City Council on July 24, 2017. Following their introduction, a public hearing on both ordinances would be held by the Planning Commission, which would then vote on whether to recommend the ordinances to the City Council. This hearing could take place as early as August 2017. The City Council would then hold another public hearing (potentially in September, but more likely in October or November 2017) and ultimately decide whether the ordinances should be adopted.

If the city rezones Scott’s Addition, it will be just the first step toward actualizing the PULSE Corridor Plan. (See related alert, “Fast Buses May Bring Major Development Opportunities to Richmond.”) McGuireWoods’ land use team believes that if Scott’s Addition is rezoned and the TOD-1 district is established, there may be significant opportunities for RVA’s commercial real estate community to actualize the city’s vision for denser, more urban development in this area. Increased opportunities mean greater transactional potential along the PULSE route where market conditions and development readiness appear ready to be aligned.

Attorneys Ann Neil Cosby, Brennen Keene, Rob Benaicha and Danielle Stokes regularly handle land use and transactional matters in these areas and can share more information with you on the city’s plans, areas identified for development potential and how to navigate the new zoning requirements to come. To learn more, contact Ann Neil Cosby at acosby@mcguirewoods.com or (804) 775-7737.