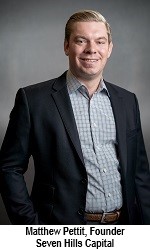 Matthew Pettit: I chose to pursue the independent sponsor model as a means to build businesses instead of portfolios. I launched Seven Hills after founding and operating a dermatology management services organization. I knew I didn't want to run another company from the chief executive officer's chair and also did not want to return to a traditional private equity firm. I felt the independent sponsor model was a great way for me to build businesses without the typical transaction constraints of a traditional private equity firm.

Q: How long have you been operating as an independent sponsor and how long did it take you to close your first deal?

MP: Seven Hills was launched in earnest in 2017 after I sold my dermatology company. I spent 2017 developing conviction around certain industry niches, establishing best practices and building out a pipeline. We closed two platform acquisitions in 2018 that were a direct result of our targeted healthcare services approach.

We attribute this success to the fact that we were solely focused on healthcare. This fundamentally narrowed how many partnerships we considered. In addition, when we went to different partners, they knew we were only looking at healthcare, as opposed to just trying to complete a deal. We had a view going in of what we thought the ideal partnership would be for us. This permitted us to easily inform people about what we were and were not trying to accomplish. At the same time, we could also explain how we think about creating value and ask if that aligned with how a prospective partner thought about value. This further demonstrated that we were going to approach the partnership differently than a generalist investor.

Q: What are some of the most impactful reasons you think the independent sponsor model has grown so robustly and what changes do you envision in the future?

MP: I believe the growth is driven by the flexibility the model provides for companies, capital providers and, of course, sponsors. The market will continue to grow, but sponsors must provide a defensible value proposition to participate in the growth.

I think a lot of people know there is capital interested in the independent sponsor asset class. As a result, some of the deals being put together do not necessarily have unique differentiators that ensure the sponsor is deserving of the economics in the current market. Sponsors need to be careful about just grabbing a deal and shopping it. I worry in this market about new entrants taking such an approach. I believe sponsors need to look at the companies and the capital providers and say, "Here's what we are going to do, here's why we play an important role and here's why we should be part of these transactions."

Q: What are the most common misconceptions about the independent sponsor model?

MP: There are several, but to me the most common is that sponsors want to transform into private equity firms. Many of us chose this path to pursue differentiated opportunities. Deviating from the model would not allow for the same type of flexibility.

Not everyone wants to be a middle market or upper middle market private equity investor. People like me really do want to focus on building great businesses. You can build great businesses a lot of different ways. You do not necessarily need to do them through a traditional fund structure, which impacts the ways you can build businesses. This includes putting constraints on matters such as people and time duration. If you do things under the independent sponsor model, you will have a lot more flexibility.

I've invested as part of traditional, bigger funds and certainly liked aspects of that model. However, through Seven Hills, we've now essentially built three companies and demonstrated that we can operate outside of the fund construct. Not investing out of a traditional vehicle hasn't hampered our ability to pursue transactions. Defensible ideals and strong companies will attract capital.

MP: Ultimately, it comes down to culture and alignment, but I believe any sponsor should ensure they are running the same value creation playbook as their partners. For us, we are very inquisitive on the acquisition front, which requires us to invest in people, processes and systems in the first year of ownership. Additionally, when choosing a capital partner, we always ensure they share our same views on value creation throughout the investment period.

In addition, the fact that these deals are smaller, with fewer institutional processes in place, means that you can't just flip a switch and everything will be humming on day one. These companies require investments, patience and a lot of hard work. We need a capital partner willing to get into a boat with us and row; a partner committed to taking a slow and steady approach and doing so together.

Prior to forming Seven Hills, Pettit founded Ascend Dermatology with the goal of creating an organization that provided world-class, compassionate care to dermatology patients and offered a unique succession planning vehicle for dermatology practice owners. He served as the chief executive officer of Ascend, where he oversaw operations, the construction of a corporate team and associated back-office support center and all financial functions. Additionally, Pettit led business development sourcing and the execution of several add-on acquisitions. Ascend merged into Forefront Dermatology in 2016.

Pettit developed his passion for healthcare after being involved with several successful ventures as an investor and adviser while at Beecken Petty O'Keefe and Co. and Piper Jaffray. He worked with companies in the healthcare information technology, practice management, staffing, infusion and home health sectors. Pettit has also made personal investments in the healthcare space, targeting primarily outpatient services and personal wellness. In conjunction with his personal investing, he served on the board of directors of LYFE Kitchen. Pettit also currently serves on the board of The VersiCare Group and Reliable Medical Supply.