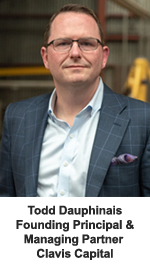 Todd Dauphinais: I didn't originally set out to become an independent sponsor. After spending most of my career in senior operating and P&L leadership roles, I was in the process of interviewing with several private equity firms in Dallas. It occurred to me that the skill set I possessed, which came from a rich operations background, was not the same skill set that your typical large private equity firms greatly valued. I kept trying to find a firm with operating people as opposed to financial people and was unable to do so.

Right around that time, the independent sponsor model started to take off. The lightbulb turned on for me when I realized that there was so much capital available that one didn't actually need to raise a fund to be successful. A friend of mine suggested that I should start my own team instead of joining someone else's. That was the spark that led to Clavis Capital Partners.

It was really a confluence of events. It was the right time in my career. It was the right situation, where there was an excess of capital. And people were starting to look at the independent sponsor channel as legitimate.

Q: How long have you been operating as an independent sponsor? How long did it take you to close your first deal?

TD: I've been operating as an independent sponsor for about 5.5 years. My first deal took around 18 months to complete, which was a bit of a surprise.

I talked to a lot of people as I was getting launched and everyone said it would take me 12-18 months to complete my first deal. I remember distinctly thinking that I was going to be able to do it a lot quicker. Lo and behold, they were right. The lesson I took away from that experience was that it didn't matter that I had been a CEO before, was a little older than your typical independent sponsor and had more experience than many independent sponsors. That first deal just takes that long. There's no real way around it unless you get very lucky.

Q: What are some of the most impactful reasons you think the independent sponsor model has grown so robustly? What changes do you envision in the future?

TD: I believe there are two particularly impactful reasons. The first is that a lot of capital has been raised over the last 10 years. Capital is readily available and it's looking for new, quality deals.

The second is that, considering the valuations that exist in the market today, partially because of all that available capital, the importance of one being able to drive value in portfolio companies through operational and strategic experience has increased substantially. It's more difficult to financially engineer value when you're buying entities at the values commanded in today's marketplace.

More people with an operations background like mine are entering this market, which contrasts to historical trends that typically saw participation by those with financial backgrounds and skills. I think that's a key dynamic that has occurred over the last 10 years or so and has given rise to the independent sponsor model.

As far as the evolution of this model, I think you will see two developments occur. First is that, more and more, independent sponsors will bifurcate into two groups of people: those who are trying to build companies and those who are out chasing deals and will ultimately move on to something else.

Second is that I strongly believe there will be an evolution where we will see hybrid-type models. These models will see independent sponsors team up with a family office or other institutional groups and create hybrid- or synthetic-type funds. I'm starting to see more of that in the marketplace. This is something that we at Clavis are thinking a lot about and that's where I think this model is going.

TD: The biggest common misperception is that independent sponsors are fundless because they have to be. Many independents, like Clavis and others, could go raise a fund but prefer this model because it allows us to concentrate our efforts on what we really like to do and are good at: finding and executing on opportunities and working with our portfolio companies to drive operational and strategic value. We don’t want to spend our time in the asset allocation business but prefer to spend it driving value creation within portfolios.

TD: We want our capital partner to be as passionate and excited about a deal as we are. Personal chemistry helps. It's great when both parties like and respect each other and share common goals and visions for the opportunity. You don't really know if the partnership is a good one until things go sideways at the portfolio company and you must work through a difficulty. Everyone is great when things are going well; it's how you work through the tough stuff together that defines a good partnership.

Todd Dauphinais is the founding principal and managing partner of Clavis Capital Partners, responsible for overseeing all aspects of the firm's investment, operational and fundraising activities. Over the course of his career, he has completed more than 25 transactions representing more than $1 billion of capital deployed. He has also held senior operating and strategic roles in manufacturing and industrial companies throughout his career.

Prior to starting Clavis, Dauphinais was responsible for the North American operations of a large Europe-based corporate investment fund. Previously, he served as the CEO of EFI Electronics, an industry-leading manufacturer of electrical protection and power quality products, where he led his firm to record revenues and profitability for four straight years and was awarded the prestigious Shingo Prize for manufacturing. Before EFI, Dauphinais served in various strategic and operating roles at leading firms, such as Schneider Electric and Rockwell Automation. He started his career as a strategy and merger and acquisition consultant with Deloitte Consulting, focused on advising Fortune 500 clients in the electric and gas utility sector.

You can meet Todd and other impressive independent sponsors at the 2019 McGuireWoods Independent Sponsor Conference in October: www.independentsponsorconference.com