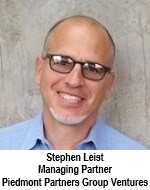 Stephen Leist: I spent 16 years inside large investment banks in the listed equity divisions as a research analyst, salesman and division head, and I have always been fascinated by corporate capital formation and investment management.

After leaving Wall Street, I was a chief operations officer for a number of absolute return investment management firms, but by 2005, I could see that outperforming the market for hedge funds was becoming increasingly rare. I could also see that the private equity (PE) business had far more available alpha.

In 2009, I started to work on an investment project with Warren Hellman, co-founder of Hellman & Friedman. He asked if I would be interested in joining his firm. When I hesitated — after all, I had spent most of my career inside big organizations — he suggested that I start my own investment group and his firm could invest in opportunities that we identified. Hellman was a mentor and my hero, so that's how Piedmont Partners Group Ventures (PPGV) came about.

Q: How long have you been operating as an independent sponsor and how long did it take you to get your first deal closed?

SL: PPGV launched in 2010 and it took over two years to close a transaction. We got to within a signature of closing on our first deal in that first year, but complex deals can fall apart at any point. That was a painful lesson.

Q: What are some of the most impactful reasons you think the independent sponsor model has grown so robustly and what changes do you envision in the future?

SL: In 2000, the United States had roughly 8,000 listed companies. We now have about half that amount. A number of factors have caused this, such as the Sarbanes-Oxley Act and several severe market corrections, but it is also important to recognize factors like the growing creativity and flexibility of the private debt market and the massive expansion of capital and range of focus to the PE market. When PPGV started about 10 years ago, the number of serious investors who invested on a deal-by-deal basis could be counted on your fingers and toes. Today, I expect there are several thousand institutions that take this approach.

Q: What are the most common misconceptions about the independent sponsor model?

SL: There are so many misconceptions. Where do I start? Many of the large PE firms have changed their stripes as the amount of capital they have under management has mushroomed. Most now expect the deals to come to their door by way of a black car accompanied by a banker and followed by an auction.

As an independent sponsor, we don't take the meetings with bankers or hear roadshow presentations. We go out to visit with more than 300 companies a year from our offices in Oakland, California, and in Denver, New York, London and Tokyo, with a goal of finding 15 good ideas in companies that we can help. We don't expect that we will be successful in working with more than two or three of them.

The biggest misconception: C-suite executives who think they will find meaningful resources focused on them inside investment banks or big PE firms. I-banks are coin-operated, and chances are you don't have enough money to interest them. Big PE lacks the time to problem-solve for the small- to mid-cap corporate community. Most are best served by working with a good independent sponsor team.

SL: The biggest issue for us is trust. Big PE and so many other capital resources are under the illusion that assets under management and visibility will bring quality transactions to their door. They could not be more wrong. There is more money sloshing around in the system than there are good ideas. Counterparties that keep their word and respect their deal partner's intellectual property (IP) get our first call. We come back to dependable, reputable firms again and again. This is the main reason why Hellman & Friedman is still the gold standard.

By contrast, if you keep us busy for a month marking up the nondisclosure agreement with your expensive outside counsel, chances are we won't show you a deal again. If you wine and dine us to get access to our deal flow and then take off for a three-week trip to Italy when it comes time to pull the bid together, we won't be calling on you again. If you start to treat our IP as your IP, or threaten to circumvent us, you will not be top of mind for our best ideas.

Q: What do you envision as the future for the independent sponsor model?

SL: I think PE as an investment sector has a long way to go. PPGV expects to see further declines in the number of listed equities, not just in the United States but in international markets. We hope that services to the independent sponsor industry continue to grow as the industry expands. There is currently too much focus on services to the blind pool funds community and not enough focus on independent operators. Banks and lenders have done a pretty poor job in connecting with this market and serving small- and mid-cap companies as their focus remains on the brand-name PE firms.

Stephen Leist is managing partner of Piedmont Partners Group Ventures. He spent 20 years inside investment banks in Asia and the United States. Leist ran the Asia Pacific Equity activities of Salomon/Citigroup from 1999 to 2001, after stints at Morgan Stanley, UBS and Deutsche Bank. From 2005 through 2007, Leist built Merriman Curhan Ford's asset management division as the group's chief operating officer. He is an active member of the innovation advisory council of the Japan Society of Northern California. Leist graduated from Wesleyan University with a BA in history and attended the Falcon Program for Japanese Studies at Cornell University. He is an enthusiastic reader, skier, biker, coach, carpenter, father, student and mentor.