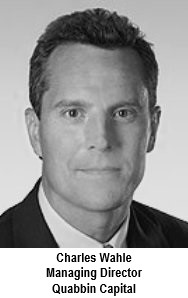 Charles Wahle: Our firm was founded 30-plus years ago as a family office. It remains that today. The entity Quabbin Capital manages a single, offshore family's assets in the United States. The family’s commercial history started in large projects and construction. The patriarch, who is now in his 80s, had an engineering degree and made his money doing infrastructure work. Starting in the late ’70s and early ’80s, the family invested in Boston real estate, primarily commercial, and made significant returns. The family was fortunate to sell the majority of its real estate assets before the market reversal in the late ’80s.

Following these sales, the family shifted the focus of its alternative asset investing to private equity and venture capital funds and some direct private equity and venture capital investments. Besides handling these investments, Quabbin performs other family office tasks including managing two California vineyards and overseeing personal real estate in the Boston area. We are one part typical family office and one part private equity investor. We are a little different from most independent sponsors — or fundless sponsors — because the family usually invests along with the three principals from Quabbin: myself, Steve Leese and John Snow. This makes Quabbin a sort of “semi-funded sponsor.”

Since I joined the firm seven years ago, we have shifted more of the focus on the alternative assets side to serving as a direct private equity investor. The standout investment we made was Chandler Signs, based in Dallas. It is a national outdoor sign manufacturer for Fortune 500 customers that generates close to $100 million in revenue annually. Our customers are companies like Chick-fil-A, Marriott and Hilton Hotels, major banks and healthcare firms, among others. Chandler is fortunate to have a well-diversified customer base. Chandler was our template transaction and a new focus for Quabbin. It essentially represented the launch for the independent sponsor model.

The family is interested in investing usually a portion — approximately 10 percent — of the equity capital necessary to complete these deals, but we need to raise the majority of the equity, mezzanine and senior debt from other groups. That is why, when we sign a deal, my two colleagues and I act more like an independent sponsor and raise the majority of the capital from outside sources.

We have been operating in this hybrid, semi-funded sponsor model for about five years. Prior to that, we were primarily investing the family's PE allocation as a minority investor in other private equity-backed direct deals or we supported other independent sponsors on a minority basis. We watched these independent sponsors and saw the model be successful. This led us to believe we could do the same thing, serving as the lead sponsor and actively managing these businesses.

Q: What are some of the most impactful reasons you think the independent sponsor model has grown so robustly?

CW: One reason why I think it is growing is that it is a bit of an outsourced deal-origination model for some general partners (GPs). Our first deal was with a GP: Dos Rios Partners, based in Austin, Texas. We closed Chandler with them. We also had other partners in that deal, which Dos Rios sourced: Main Street from Houston and Capital Southwest from Dallas.

We brought a good deal to Dos Rios. It was priced well and well down the road towards closing. We had a fully negotiated and signed letter of intent. We hired a law firm on our nickel and took on the expense of drafting a purchase agreement. We had fully negotiated term sheets on the senior debt. We also had gone at-risk and paid for the quality of earnings analysis. By the time we brought our equity partners into the transaction, we felt like we had completed 90 percent of the diligence necessary to close the transaction.

We feel that, for a GP like Dos Rios, there was a lot of value. It is an auction from the standpoint of us trying to choose a partner, but the field is so much smaller. If you think about efficiency of time for a GP, it is usually one of two or three firms being considered by an independent sponsor as a partner. This outsourced deal-origination model works for some GPs.

The other reason is the limited partners (LPs) side. We are working on a transaction now with a group that is helping us fundraise from some LPs. We are trying to raise our equity more like a GP would do, but on a deal-by-deal basis instead of raising it for a committed fund. We are trying to tap the LP universe primarily for the equity.

To elaborate further on why I believe the independent sponsor is growing, part of it is you are getting support from the GP community, and there is also a strong desire for LPs to put money directly into deals. A number of LPs receive equity coinvest rights when they sign up for a fund with a GP. Oftentimes, their appetites are not satisfied just with those opportunities, so they are looking for other chances to make direct investments.

What we like to do once a deal is closed is roll up our sleeves and take a highly active role in day-to-day operations of the business to help add value. We tend to be very supportive of and involved with management teams. For instance, my partner Steve Leese was the interim chief financial officer for Chandler for three years before he hired a replacement. I ended up completing a major real estate project for Chandler to move the company from an older facility to a new, much larger facility. That project took two years from start to finish. Chandler is now in a state-of-the-art facility with the capacity to expand significantly as the business grows.

CW: There are examples of independent sponsors that essentially get a book from an auction and then go and try to shop that with potential GP or LP partners, but those independent sponsors perform almost no work up front to put the deal together first. If they get lucky and close a deal, they do little except collect board or management fees, but are not earning those fees. That can cause a bad reputation for independent sponsors. That is one end of the spectrum.

The other end is hopefully where we sit. We take things far down the road in terms of being a lot closer to closing and adding pre- and post-closing value. Pre-closing, we do much of the work and go at-risk for dead deal costs. Post-closing, we roll up our sleeves and get busy and do significant things to add value to the company.

I think the misconceptions exist because of bad behavior by some groups.

CW: When looking for a capital partner, we are trying to achieve a mutually beneficial and respectful relationship, where they see the value we bring and know we are earning our management fees over time. We want our partners to recognize that we have played an important role in the successful outcome of the transaction, which is why over the 3-to-5-year hold period, we work to add a lot of value.

When we get busy post-closing, we are looking at all of the departments within the company: finance, manufacturing, human resources and sales and marketing. Generally speaking, we divide those between the Quabbin partners and take on the specific tasks within those disciplines.

We try to bring best practices to these companies. Oftentimes, they are entrepreneur-owned, and we are the first institutional capital in these businesses. This creates another level of reporting and discipline to the new debt holders and the equity holders. There is a new monthly reporting package that needs to be generated. We try to spearhead that work.

We also try to help the company by not only bringing in best practices, but also growing the company significantly through special project roles. As with most private equity investors, growth is critical to a successful outcome, so Quabbin also handles evaluating add-on acquisitions. In the Chandler example, we have evaluated about a dozen potential add-on acquisitions. We have decided to grow the company organically, but growth by acquisition was certainly on the agenda when we bought the company. We feel like when we are paid a management fee, we are given an opportunity to earn it and want to make sure we do so.

Charles "Chip" Wahle joined Quabbin Capital in 2014 to enhance the firm's investment origination, evaluation, processing and monitoring capabilities. He is engaged in transactions from start to finish and plays an active role in managing acquisitions post-closing. Wahle developed broad corporate finance experience through his work with large corporate and middle market entrepreneur-owned businesses. He has worked for many years on mergers and acquisitions across a variety of industries and is focusing his attention on helping to build the Quabbin portfolio and assets under management.