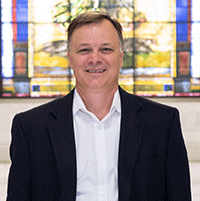 Rob Carskadden: Prior to founding 3 Rivers Capital (3RC) in 2005, my career was very diverse. I started in traditional investment banking in New York, worked in manufacturing and product development in the automotive industry and held multiple positions within the healthcare and life sciences industry, including supply chain management and ecommerce. I was constantly on the move and learning.

I recognized early in my career that change in my professional life kept me challenged. In 2003, I was operating my own consulting firm. During a project where I was implementing an activity-based costing management system for a tier 1 automotive supplier, I met my current partner at 3RC, Dale Buckwalter. Like me, he had a diverse operational and financial background. We both were intrigued by the private equity industry and believed that a significant transfer of generational wealth was about to occur in the lower middle market. These businesses were primarily family-owned, and many did not have a good succession plan or exit strategy to either diversify or realize the equity value they created. So, we launched 3RC around that strategy, leveraging our broad operational and financial experience to enhance the value of these businesses. Change has been a constant since we launched, and we have certainly been challenged.

To answer your question directly, we didn't decide to become an independent sponsor. We decided to be a principal investor. Like many private equity startups, we needed capital and needed it fast. It is obviously easier to raise capital for one deal than it is to raise capital for a blind pool fund when you have no track record. Becoming an independent sponsor wasn't really a choice. It was something we believed we had to do.

With that said, we, like many others, ventured to dream about building an outstanding track record and ultimately raising a fund. But once we had established relationships with our investors, we realized the reliability and value of the investors were better than the alternative. What we have is not easily duplicated without established credibility.

RC: We employed what I would describe as a more institutional approach to what is considered the independent sponsor model. Since our official launch more than 15 years ago, we have put into place processes that are more institutional in nature. Most of our investors have been with us from the beginning and participate in every deal. We have a staff of seven professionals and five operating partners engaged in deal evaluation and execution, investor relations and portfolio management.

We operate like any fund-backed private equity firm; however, we do not send capital calls. We set up meetings with our investors to discuss the opportunity. What we have is invaluable because it can't be bought — it must be done. Who we were early on has evolved over the years. We were fortunate along the way to have made more good decisions than bad, which helped us gain momentum and credibility with our investors.

Again, to answer your question more directly: We had a deal in hand before we started engaging investors, and we closed five months after introduction to the deal. With that said, that one deal was barely enough to sustain us, and we were motivated.

RC: There are a couple of reasons. One is the source of capital is very deep. The proliferation of the family office has created a broader variety of access to deep pockets with 100-year investment time horizons. Most of the founders of these offices created their wealth through private business ownership, and they get it. The idea of investing money in a blind pool doesn't make as much sense to them. Many have even tried — with varied success — to essentially build their own in-house private equity firm, but many have come to realize that having a principal partner that handles the transactional activities and strategy implementation is valuable. Their value-add comes in the form of relationships and perspectives.

RC: That capital is very hard to find or not available. It's available, but you need to have differentiated deal flow, subject matter expertise and a good strategy.

A few years ago, we started a project to develop a more robust thematic approach so we could communicate our clear areas of interest to our investors. We published 14 white papers outlining our vision of the major factors of influence over the next decade and drilled down into specific vertical markets that we believe will thrive in the coming years. We use these communications to align our interests with our investors and drive the dialogue to find the right strategic partner. Secondly, we need our capital partners to have the capacity to grow within the context of the specific strategic plan in that investment.

Rob Carskadden co-founded 3 Rivers Capital, a lower middle market private equity firm, in 2005. Prior to 3RC, he had 12 years of experience in operational finance and process analysis.

Carskadden joined Fisher Scientific in 1997, where he held various financial positions at the corporate and operational levels, including business development, distribution, logistics and sourcing. While trying to solve an inventory issue, he launched and became general manager of an online business-to-business platform to market scientific equipment and supplies (Einstein's Garage). After his success at Fisher, Carskadden launched Standish Consulting, a boutique strategic advisory firm focused on operational, financial and process design improvement.