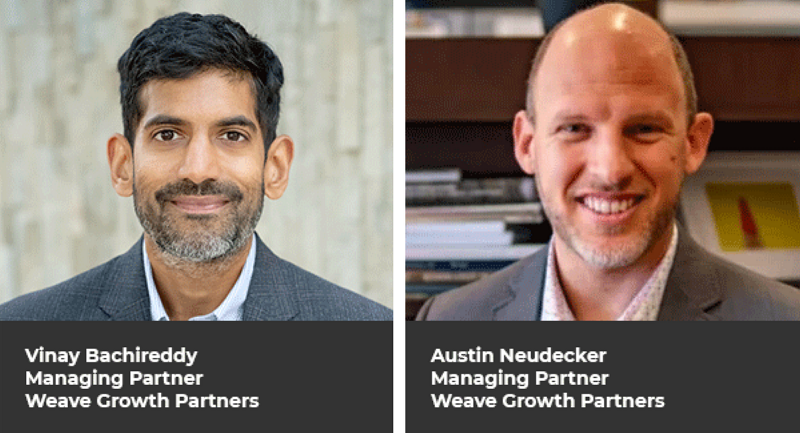 Vinay Bachireddy (VB): At Weave, we are deep believers in new technologies and innovation. This applies not only to our portfolio companies but also to our investing strategy. As a flexible vehicle, the independent sponsor model allows us to experiment and build new models for investing.

It enables us, a team that hasn't worked together before, to establish a track record. It’s also much more flexible than the traditional private equity model. There are no capital commitment mandates in which you must deploy capital in a narrow criteria box within a limited time frame. Every transaction is unique, and because we are "independent," we can select the right type of capital in each situation. This allows us to maximize our value creation initiatives and drive outsized returns.

Austin Neudecker (AN): We have operated as an independent sponsor for 2.5 years. The pandemic took the wind out of our sails and jeopardized our first deal, which we ultimately closed after 15 months from our initial meeting with the business owner. Since then, we have had tremendous success, closing out two more deals in the same year.

Our 2021 was pretty special — we closed three deals totaling $125 million in enterprise value.

VB: The independent sponsor model has grown for two reasons. The first is the growth and increased competitiveness of the private equity industry. Both the number of private equity funds and the total amount of capital raised has increased dramatically over the past 10 years. As a result, it has been harder for private equity firms to find deals and differentiate themselves to exceptional sellers, who now have a variety of options to realize liquidity. Independent sponsors have helped on both fronts: identifying attractively valued deals and providing sellers with a clear value proposition.

The second reason the independent sponsor model has grown is the rising cadre of industry executives and private equity professionals who have branched out and started their own firms. This development and the historical returns these early movers have generated have brought credibility to the space, such that we now see funds being raised whose mandate is to work only with independent sponsors.

Another misconception is that independent sponsors are only dealmakers and are not focusing on adding value to portfolio companies. This certainly is not true at Weave. Prior to closing a transaction, we identify initiatives that will move the needle and transform the business into a faster-growing, more efficient enterprise. Our goal is to bring growth playbooks from Silicon Valley to the middle market.

VB: Alignment is everything. You have to align with your capital partners on two questions, in particular. The first question centers on the roadmap for the company over the next five years. Having a shared vision for the company's strategy is essential for a successful partnership. If you have different ideas about what the company should do post-close, the relationship will suffer.

The second question is around the respective roles of the independent sponsor and the capital partner in monitoring and adding value to the portfolio company. Having a clear consensus on who is doing what sets clear expectations for everyone around the table and establishes a solid foundation for the relationship.

Vinay Bachireddy is a managing partner at Weave Growth Partners. At Weave, Bachireddy sources investment opportunities, evaluates companies and works with lenders and investors. He focuses on businesses that deliver a differentiated value proposition, build long-term customer relationships that result in recurring revenue and have a growth path to building an enduring business franchise.

With experience in both running companies and investing in companies, Bachireddy has a unique purview that enables him to understand the realities on the ground while positioning the business to scale long-term.

Bachireddy has spent over a decade in investing and finance at Q Investments, Barclays Capital, Deutsche Bank and the Grassroots Business Fund, an impact investing venture from the IFC/World Bank. He has also served as an executive/operator of HRO Resources, a business services company based in Texas. Bachireddy's industry expertise includes financial services, business services and insurance.

Neudecker is a seasoned operator and repeat founder. As head of growth at Rev.com, he led an AI-powered transcription business from zero to more than $5 million in revenue in under two years. He started two health tech companies and is an alum of Silicon Valley's Y Combinator program.

Previously, Neudecker worked in venture capital at Comcast Ventures and sourced deals for Foundation Capital. As a strategy consultant, he and his teams drove billions of dollars in operational and supply-chain efficiencies at Fortune 50 companies. Neudecker also co-founded Startup San Diego, a community organization helping regional entrepreneurs get off the ground. The city of San Diego named a day in his honor.