A View From the Top: Steven Windwer of Bay State Physical Therapy

The interview below is part of a new series from McGuireWoods that features interviews with C-suite leadership of private equity-backed portfolio companies. To recommend a leader for a future interview, email Holly Buckley at hbuckley@mcguirewoods.com. 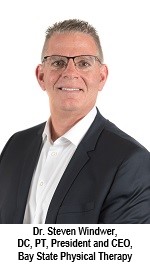 Q: Your organization recently transitioned to working with a private equity firm. How was your business evolving leading up to this partnership?

Dr. Steven Windwer: We were growing at a very fast pace. Over the past several years, we made a concerted effort to grow the people and infrastructure of the business to the point where we felt it was a platform business.

In our space, we are one of the larger privately owned practices in the country. Since the tailwinds for physical therapy are so strong, there is a lot of activity in the space. We have received calls and emails from folks interested in our business for the past four or five years.

Q: What led you to decide to make the transition?

SW: The decision essentially came from the marketplace telling us we should think about pursuing a partner. We were large, had market share and market dominance, had a proven track record and had built a platform business. As a result, we believed we should think about pursuing a transaction, either with a larger, established and more national physical therapy business or become that platform ourselves.

There was some internal transition in the business, and I was also thinking about my age and how to have a succession plan for myself. In addition, there was consideration of what was happening in the marketplace in general. This included the thought that the money markets wouldn't remain as strong, meaning the stock markets might eventually crash and valuations could become depressed. I felt an internal tension telling me the timing felt right. My concern was that while we could continue to grow, during that period, the entire marketplace could shift dramatically.

It seemed all of these factors happening simultaneously made it a good time to think about and move ahead with a transaction.

Q: How did you identify the firm you wanted to partner with?

SW: Having so much inbound activity over a number of years gave me an opportunity to get a flavor for the potential prospects in the marketplace.

Ultimately, what I learned during the preceding two to three years is that who the partner is must be the most important consideration. Finding someone who would be a great partner became the top priority on my list. After meeting with many prospective partners, I came to understand what I didn't want and ultimately set out to find what I did want. This was someone who would be a trusted, thoughtful partner and one that would have tremendous integrity. That turned out to be Calera Capital.

Q: What advice would you give to a founder CEO when evaluating potential partners?

SW: Get to know all of your potential partners so you can decide what's most important to you. Value and money are certainly important, but you need to think about what life is going to be like after the deal is completed.

Choose your partners wisely. Selecting a partner is a gigantic decision, so ensure you understand before going into it what you are getting into and all the likely ramifications.

Q: What other lessons did you learn while going through the evaluation process?

SW: During the process, you speak with a number of people essentially at the same time. I was blown away by our first conversation with the folks at Calera. They came off as being very impressive and really aligning well with us. With that said, I expected to eventually be disappointed in some aspect of the firm, as this had been our experience with other firms. But that experience never occurred with Calera. They were thoughtful and full of integrity throughout the process, which was long and difficult. Now, many months post-deal, they're still great. I learned that behavior doesn't lie. If you follow the behavior during the courting process and diligence process, you really get to know folks.

As a founder and practitioner who does not live in the financial/business world, I’ve found it's eye-opening what's out there. There are all types of people and firms. It's important to stick to your values and attract the type of partner that really fits who you are, and not just chase the dollar.

Steven Windwer, DC, PT, is president and CEO of Bay State Physical Therapy, based in Randolph, Mass. After graduating from Boston University with his degree in physical therapy, Dr. Windwer elected to go back to New York Chiropractic College. Holding dual degrees in physical therapy and chiropractic, he opened his first office in Quincy, Mass., in 1990. Firmly believing in the manager/partner model, Dr. Windwer has been able to establish more than 60 physical therapy offices and 13 chiropractic offices across Massachusetts, New Hampshire and Rhode Island.