On Dec. 1, 2020, the Nasdaq Stock Market (Nasdaq) submitted a proposal with the U.S. Securities and Exchange Commission (SEC) that, if approved, would require Nasdaq-listed companies to (1) have (or explain why they do not have) at least two diverse directors and (2) publicly disclose certain diversity statistics about their boards of directors on an annual basis. The proposal is under review by the SEC, and public comments are due to the SEC by Dec. 30, 2020.

Read on to find out how the proposal could create more diverse boards and promote consistency and transparency in diversity reporting.

The recent social justice movement has brought an increased focus on and commitment to diversity and inclusion on the boards of public companies. In recognition of this, Nasdaq seeks to encourage its listed companies to diversify their boards in more meaningful ways and enhance diversity reporting requirements to produce consistency and transparency in company disclosures. According to Nasdaq, the goal of the proposal “is to provide stakeholders with a better understanding of the current board composition of its listed companies and to enhance investor confidence that listed companies are considering diversity and inclusion in the selection of directors, either by including at least two diverse directors on their boards or by explaining their rationale for not meeting that objective.” Nasdaq also cited extensive research showing that diverse boards improve financial performance and corporate governance.

For purposes of the proposal:

If a listed company does not have at least two diverse directors, as described above, it will be required to explain the reasons why in its proxy (or information) statement for its annual meeting of shareholders, or on its website. If a company elects to provide the disclosure on its website, it must notify Nasdaq where the information is available by submitting the URL link through the Nasdaq Listing Center no later than 15 calendar days after the company’s annual meeting of shareholders. Nasdaq indicates it would only verify that the company has provided the information and would not assess its substance.

Proposed Rule 5606 requires each Nasdaq-listed company, subject to certain exceptions, to disclose on an annual basis statistical board diversity data about the self-identified gender, race and LGBTQ+ status of the company’s directors, in a table format substantially similar to the one below. Any director who chooses not to disclose a gender would be included under “Gender Undisclosed,” and any director who chooses not to identify as a particular race or as LGBTQ+ would be included in the “Undisclosed” category at the bottom of the table. 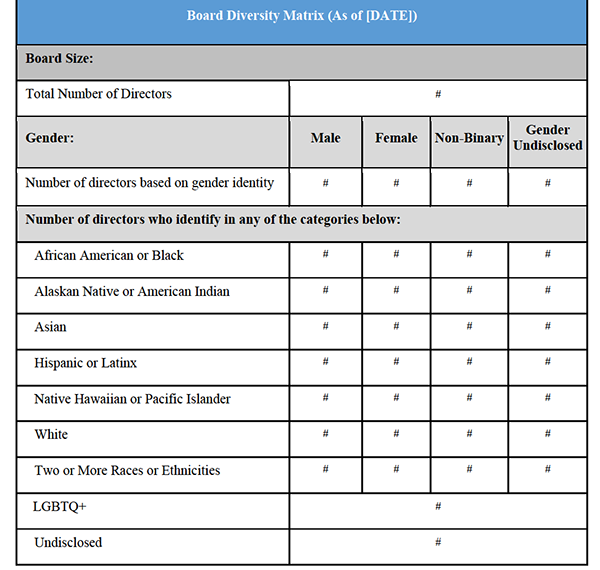 After the first year of publication, the listed company must disclose the current and prior year’s diversity data. The information must be published in the company’s proxy (or information) statement for its annual meeting of shareholders, or on the company’s website. Disclosure on the website requires the same process as described above for Rule 5605(f).

Companies that fail to comply with Rule 5605(f) or Rule 5606 will have until the later of their next annual shareholder meeting, or 180 days from the event that caused the deficiency, to cure the deficiency. If the company does not cure the deficiency within the applicable cure period, it will be subject to possible delisting.

If approved by the SEC, Nasdaq-listed companies would be expected to comply with these new requirements as follows:

In addition, the proposal provides a one-year phase-in period for companies newly listed on Nasdaq after the approval date that were not previously subject to a substantially similar requirement by another national securities exchange. Such companies would, in effect, have until the later of the transition periods provided above or one year from the date of the listing to satisfy the requirements.

Certain types of companies, such as special purpose acquisition companies, asset-backed issuers, and other passive issuers and limited partnerships, would be exempt from the Rule 5605(f) board diversity requirements and the Rule 5606 statistical disclosure requirements.

The proposal is under review by the SEC, and public comments on the proposal should be submitted to the SEC by Dec. 30, 2020. The SEC has 30 to 240 calendar days after publication in the Federal Register to approve the proposal.

Please see the proposal and Nasdaq’s FAQs for a more detailed account and explanation of the proposed changes.

For additional guidance on the information in this alert, please contact any of the authors, any member of McGuireWoods’ securities compliance team or your primary McGuireWoods contact.

McGuireWoods’ securities and compliance team assists private and public companies in capital-raising efforts through private and public offerings, and assists public companies with their reporting obligations under the Securities Exchange Act of 1934, including forms 10-K, 10-Q and 8-K, Section 16 reports and DEF 14A (proxy statements), as well as with Regulation FD and Regulation G compliance. We prepare insider-trading policies, develop training programs and assist with other aspects of securities transactions engaged in by company officers, directors and significant security holders, including 10b5-1 plans and Rule 144 compliance.