The following series features interviews with Black dealmakers and trailblazers in the private equity and finance community. To help us spotlight professionals making a difference in their career pathways, please email Greg Kilpatrick at gkilpatrick@mcguirewoods.com and Gerald Thomas at gthomas@mcguirewoods.com. 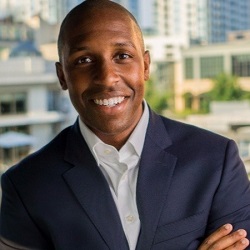 Q: What attracted you to private credit?

Kenneth Saffold: It's been an evolution over time. After completing business school, I started in asset management at Goldman Sachs. That's when I first started working on the credit side.

I left Goldman to go to GE Capital in its leverage finance group focused on healthcare. That's when I really got a broad sense for what the private credit world entails. I was there for about nine years before I left in 2017 to go to a private credit fund based in Los Angeles called Tennenbaum Capital Partners. We were ultimately acquired by BlackRock in 2018. I've been here ever since.

What attracted me to the private credit world, other than how my career unfolded, was the opportunity to partner with entrepreneurs and private equity partners to grow a business and have an impact within that business — the company and the community which it serves. I think that's important and it has kept me attracted to the industry.

Q: Why is it important for more diversity within alternatives?

KS: Currently, the number of Black professionals in the alternative space is pretty dismal. I saw a statistic that said less than 8% of all senior level positions within private equity identify as African American.

The flipside of that is as you look at the performance of the firms that identify as the most diverse, they are typically in the top third in terms of performance in the industry. It's important to note that diversity — ethnic diversity, gender diversity, diversity of thought — really plays into performance. It gives an added benefit to investors because there is a diversity of thinking, ideas and thoughts that can ultimately result in good performance for a fund.

Q: What does diversity, equity and inclusion mean to you?

Q: What do you think is the biggest challenge facing Black entrepreneurs? What advice would you provide to overcome it?

KS: In my mind, the biggest challenge facing Black entrepreneurs is access to capital. There have been several initiatives throughout Wall Street over the course of the past few years with a hyper focus on diversity and inclusion that are trying to change that dynamic. BlackRock is a part of these efforts. You can't participate in capitalism if you don't have any capital. That makes it a challenge for entrepreneurs who may have really good ideas but can't get the funding. To the extent that I try to find ways where we can make that process more streamlined, I want to do so.

My advice is that more firms should work to improve access to capital for these entrepreneurs because that's a gaping hole.

Q: Who are examples of people who have inspired you in private markets and why?

KS: Probably first and foremost is Robert Smith of Vista Equity Partners. In 2019, he made a pledge to my undergraduate institution, Morehouse College, to pay for all of the student loan debt for the graduating class. To be successful in the alternative space and then also give back to the community is for me the "Holy Grail" of success in life.

Similarly, a few other names come to mind. Kneeland Youngblood is the head of Pharos Capital. He's been a mentor of mine and extremely helpful, both professionally and personally.

Lastly Willie Woods, head of ICV Partners and chairman of the board of trustees for Morehouse. Since I was a senior at Morehouse, before he even founded ICV, Willie served as a mentor of mine and has been very helpful to my career development. He is someone I hold in very high regard.

Kenneth Saffold is a director and a member of BlackRock's Global Credit platform, where he is responsible for originating and executing private credit investment opportunities across the United States out of the group’s $30 billion in assets under management. Saffold also serves on the senior leadership team of the BlackRock Atlanta Innovation Hub. Prior to BlackRock, Saffold held roles with GE Capital and Goldman Sachs.

Saffold currently serves as a member of Children's Healthcare of Atlanta Investment Committee and a member of the Atlanta Zoo Council. He also serves as the vice president of the executive board of directors for Northside Youth Organization and formerly served as chair of the Emory Board of Visitors. Saffold is a member of Leadership Atlanta Class of 2017 and is a frequent speaker and panelist for the Association for Corporate Growth, Health South Connect and Capital Roundtable of New York. He received his MBA from The Wharton School of the University of Pennsylvania and his bachelor's from Morehouse College. Saffold lives in Atlanta with his wife Akilah and two kids, KJ and Eva.