The report, “Zoning and Segregation in Virginia: Part 2 — Expanding Housing Choices for the Future of Virginia,” builds on McGuireWoods’ previous study documenting how zoning was used as a tool to create segregated housing patterns that endure long after the Fair Housing Act of 1968 prohibited racial discrimination.

The recommendations in Part 2 focus on changes to Virginia’s planning and zoning laws at the local and state levels to increase housing choices, remove barriers to diverse neighborhoods and increase access to attainable housing.

The McGuireWoods team — led by Tysons real estate and land use partner Jonathan Rak and McGuireWoods Consulting senior advisor James Dyke — details the consequences of residential segregation and the positive outcomes the commonwealth can realize by ridding society of such segregation.

“The purpose of this report is to address the lack of racial integration in Virginia’s neighborhoods and to offer a collection of proposed solutions to this issue at the state and local levels,” Dyke said. “Our intent is not to assess blame or point fingers for past injustices, but rather to recommend specific steps that can be taken to eliminate the vestiges of discriminatory housing and zoning policies.”

The authors said zoning policies will play a major role in closing the significant wealth gap between Black and white Americans and called for “direct and intentional action” by state and local governments and the private sector.

“By increasing the availability of attainable housing, we will not only be remedying past injustices, but sustaining our economic development efforts,” Dyke said.  “Implementing solutions to this problem will help create housing and wealth opportunities for all members of our future workforce, including essential workers, first responders, teachers, nurses, trades workers and younger adults. This outcome is consistent with the overall business priority of adding more attainable housing as a much-needed tool to grow Virginia’s economy.”

Rak added: “Our vision of housing equality does not mandate where people should live. Rather, it removes legal barriers that continue the economic and racial segregation of communities. We do not propose to have all of the answers, but we hope these recommendations invite contemplation, collaboration and direct action amongst government leaders, businesses, financial institutions, real estate professionals and other members of our commonwealth.”

For details, read “Zoning and Segregation in Virginia: Part 2 — Expanding Housing Choices for the Future of Virginia.” 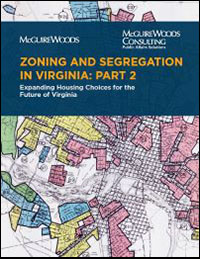