Media scrutiny, the glare of the spotlight, and shifting political alliances are just some of the unique challenges posed by congressional investigations. And these challenges are never more prevalent than when the balance of power in Congress changes hands: Corporate conduct that was appropriate when it occurred can suddenly become the target of committee staff motivated by a partisan political agenda.

Our congressional investigations team leverages the wide-ranging capabilities and relationships of McGuireWoods’ lobbying arm, McGuireWoods Consulting, comprised of a deep bipartisan bench of Capitol Hill veterans who have extensive experience with the inner workings of Congress, including a highly respected former member of Congress and White House political director. To provide the most innovative and in-depth services to our clients, McGuireWoods also relies on our technical industry expertise across a broad range of sectors, including defense, financial institutions, health care, pharmaceutical, energy, education, infrastructure, technology and transportation.

Fortune 500 companies, senior executives, boards of directors, and high-profile political leaders have called on McGuireWoods to handle a broad range of matters in the congressional arena, including: 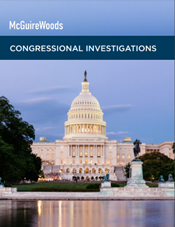