Government investigations and related enforcement actions and litigation can take many forms, but they have one element in common: They require seasoned counsel to help clients navigate these difficult situations when their businesses and reputations are on the line. McGuireWoods’ national Government Investigations & White Collar Litigation Department has the experience and credibility clients have come to trust with their most sensitive matters. Our deep bench of more than 60 attorneys represents individual and corporate clients across an array of industries in the full range of civil, criminal and congressional investigations and enforcement matters at the federal and state level.

For over a decade, Fortune 100 companies and high-profile individuals worldwide have called on McGuireWoods’ nationally recognized Government Investigations & White Collar Litigation Department to handle some of their most notable and complex matters. From the Boeing “Max 8” DOJ investigation to the Mueller probe; from the opioid crisis to clergy misconduct; from congressional investigations to highly sensitive internal investigations across a broad spectrum of industries, clients turn to our premier team for its sound counsel and extensive experience working with clients to efficiently and effectively resolve their legal matters.

Our Government Investigations & White Collar Litigation Department is proud to be recognized as an elite practice, most recently honored again as a Law360 White Collar Practice Group of the Year and consistently ranked among the world’s leading investigations firms on the Global Investigations Review 100 guide to top cross-border investigations practices. The Legal 500 United States, a premier list of the country’s best law firms, commended McGuireWoods for the “exceptional quality” of our powerhouse white collar litigation practice. Plus, in 2019, The American Lawyer named the firm a Global Legal Awards finalist in the litigation/dispute resolution of the year category for the team’s representation of Otto Warmbier’s parents in their wrongful death lawsuit against North Korea.

Our team of more than 60 professionals reaches from coast to coast, composed of a deep bench of lawyers with decades of experience handling investigations and litigation at the intersection of business, politics and law. Our mission is clear: to provide responsive, effective representation of clients through focused, intense advocacy from the moment an investigation or inquiry commences.

We also advise on matters before the DoD, FINRA, FERC and other government agencies, congressional committees, and state attorneys general and inspectors general. Many of our partners previously served in significant enforcement positions at these organizations while in government service.

Clients turn to McGuireWoods to handle sophisticated and sensitive matters for a simple reason: We know the ins and outs of civil and criminal investigations and enforcement matters at the federal and state level. We represent clients at every stage of government investigations — from informal inquiries through disciplinary proceedings and appeals — and we advise on matters involving federal agencies and other investigative bodies.

Building on a highly skilled group of former federal prosecutors, McGuireWoods has handled civil and criminal matters before the DOJ, ranging from Civil Division investigations under the False Claims Act to grand jury, public integrity, and other criminal investigations and proceedings conducted by DOJ’s Criminal Division. Our Government Investigations & White Collar Litigation Department represents clients’ interests to ensure their focus can remain on business while we press for a fair and just outcome, and our team has a breadth of experience in all manner of white collar matters.

The latest on government inquiries and enforcement actions. 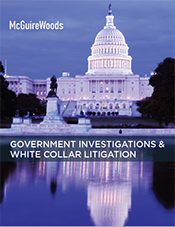 Download a PDF copy of our practice team brochure.

McGuireWoods Attorneys Recognized for Excellence By The National Black Lawyers