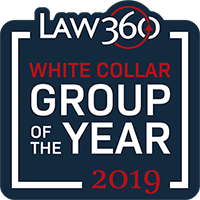 With a team of 60 attorneys comprised of former federal prosecutors and enforcement officials, three former U.S. attorneys and a deputy attorney general of the United States, McGuireWoods’ Government Investigations & White Collar Litigation Department has represented Fortune 100 companies and high-profile individuals in some of the most prominent and complicated matters of the past decade. And for its work in 2019, Law360 recently recognized McGuireWoods as a White Collar Practice Group of the Year.

One of only five firms to earn the prestigious honor, it marks the second time Law360 has recognized the firm for its handling of high-stakes investigations and enforcement matters worldwide.

In addition to the matters cited in Law360’s article, Adams represented former Acting Assistant Attorney General John Gore in a congressional investigation of the Trump administration’s efforts to add a citizenship question to the 2020 Census.

Todd Steggerda, chair of the Government Investigations & White Collar Litigation Department, told Law360 that the firm has built a national practice with 21 specialty sub-practice areas to ensure that its reach is comprehensive.

“The breadth of our experience, the range of our capabilities across all of the federal and state jurisdictions involved in investigative and enforcement activities, and the level of dedication and focus that we give to our clients” distinguishes McGuireWoods from its competitors, he said.

Dion Hayes, deputy managing partner of the firm’s litigation practice, said, “It is gratifying when independent authorities such as Law360 affirm what our clients already know — that our talent, knowledge and intense advocacy in this critical area of the law set McGuireWoods apart.”